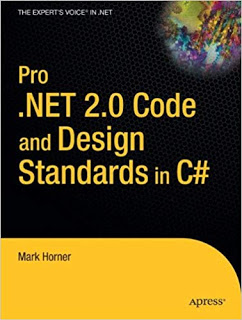 This book started great. It outlaid a structured view of how a software company should function, from the way one designs projects, to code and documentation standards. I really hoped this was the mother load: a book that would show me how a "standard" IT company functions on every level. It wasn't. Mark Horner started it well and ended it badly. A shorter book and more to the point would have been enough.

Bottom line, the book starts in an interesting way, describing what I would call "IT gap analysis", in other words the application of a simple idea: begin with a detailed (and documented) picture of what the current (start) situation is, then describe just as much detail the situation you want to reach (end). From then on, the job of describing the transition becomes orders of magnitude easier. That applies to software projects (start with what the client has and needs, then create the plan to bridge the gap), documentation (start with the functional and end with the structural) and ultimately code (start with abstract classes and interfaces, then fill in the missing code).

Other than that there are some (hopefully) nice references, then a lot of empty space filled up with irrelevant things: description of design patterns (which are nice, but there are books for something like this), a glossary of terms (some were never even used in the book!) and then the general way of describing something, then adding the "Standard acknowledges" part that basically says the same thing as his own description. It generally felt as a student paper from one that needed only a passing grade.

Sorry Mark, better luck next time. I will add here a short summary of what yours truly thought was noteworthy in the book:


My conclusion: read my summary and you don't waste two days of reading time.