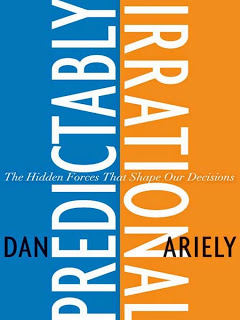 Dan Ariely is a professor of behavioral economics, the field that is trying to analyse economics via human behavior studies. In his book, Predictable Irrational - The Hidden Forces that Shape our Decisions, he is arguing that the simple model of market forces constraining people to behave rationally to maximize gain is false, as people are not rational and will never be rational. He then goes to explain various mental fallacies that we are subject to, complete with experiments testing and proving them.

The book is rather short and easy to read, split into 15 chapters and some annexes. Here is a summary:

Overall I found the book informative. If one can integrate the teachings of the book, the benefit for one's life would be great. Unfortunately, Ariely shows that this kind of rational illusions are predictable, and that people need to make great efforts to dispel them. I leave you with a video presentation from Dan Ariely on TED, just to give you a taste of what he is like and what he does.