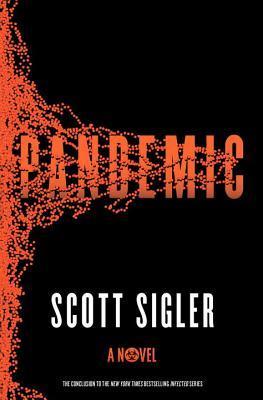 Has it been so long? It feels only yesterday I was reading Contagious, the second book in the Infected trilogy, and intending to read the third one. Now, more than ten years later, here I am finally finishing it. And it was pretty cool. I mean, it's no literary masterpiece, but it presents a consistent sci-fi future, compelling characters, action packed scenes, scientific accuracy. There was love put in this. Sometimes you just want to read something and not overthink it, like watching a blockbuster movie. And sometimes I wonder what do those people think when making those movies: Infected is much more interesting of a material. How come they don't make a series or film based on it?

Anyway, as the title suggests, Pandemic sees the whole world in the grips of the alien contagion, with the same actors trying to save it. And as in the first two books, Scott Sigler mixes some great scenes with some really corny ones, some great human insight with silly lines like "Run to the chopper", "I'm getting to old for this shit!" or befuddling ones like "Seeing an American citizen being roast to a spit does that to someone". Too bad he was American, right? I have to say that most of the horror in this book comes more from the stupid decision top brass makes, rather than from the effects of the contagion. In the end, the brave souls on the ground save the day. The ending is epic and brings closure... up to the moment Sigler thanks people for carefully advising him about consistency in the 800 year spanning Sigleverse. Ugh! Sigleverse? Really? 800 years? Meaning I have to read more of this stuff to satisfy the completionist in me? Why did I have to read the Acknowledgements?

Bottom line: action packed sci-fi horror alien invasion flick, split in three books. It is nothing if not enjoyable.