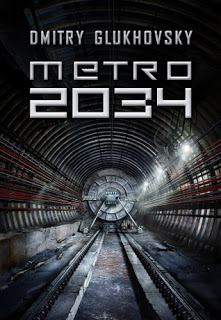 I've quickly finished the second volume, Metro 2034, by Dmitry Glukhovsky, in the Metro series of books, after reading and being captivated by Metro 2033. To me it felt more geared towards the sci-fi and the writing lore than towards the social satire from the first book. It felt less. There are fewer main characters, fewer stations, less character development, less monsters. The few people that do populate the book are so archetypal that even the author acknowledges it in the guise of a character nicknamed Homer, an old guy that searches for stories and sees his entire adventure an odyssey to be written in a book and his companions filling up the roles of Warrior and Princess and Bard.

Don't get me wrong, I liked it a lot, but I felt that the first book acted as a caricature of current society, with its many stations that each adhered to some philosophy or another, while the second veered quite a large distance from that and went purely towards the catacomb sci-fi thriller. There is still enough philosophical discourse in Homer's musings and it is interesting to see the post apocalyptic world seen through the eyes of someone that lived before as well as with fresh eyes: a girl that only knew one station her whole life. But the book was tamer and I am not the only one to think that.

Now, I scoured the net for some Metro 2035 love, but to no avail. I found a Polish audio book, but nothing else. It is ridiculous how much one has to wait to get a translation of a book written in Russian or how difficult it is to get even the original Russian text.