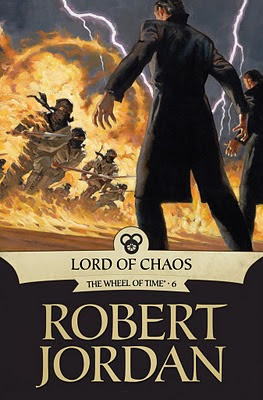 Lord of Chaos was a long book to read. In size, it was as long as Shadow Rising, the longest book in the series so far, but it felt more packed. After all, Rand and Egwene can use portals and they go where the action goes, the Tower is divided, the Aiel are divided, a force of channelling men is created, Cairhien and Tear soldiers fight along Rand, there is action in Ebou Dar, Tear, Cairhien, Salidar, Andor, Two Rivers, Amadicia, The Forsaken are executing a plan of the Dark Lord and so on and so on.

There is a problem with consistency again, at least as I see it. If this was a strategy game, imagine more players playing in the same team, but each of them doing whatever they feel like. They are all friends, they even have one central character they can rally with, but they continue to do things their way. If the other team would have even a modicum of coordination, they would easily win. Also, the series has succumbed to levelitis, the disease that causes all main characters in a story to level up continuously, until it becomes unmaintainable. Rand and Eqwene can Travel or enter Tel'aran'rhiod in the flesh, Elayne can make ter'angreal, Nynaeve can heal stilling and gentling, Mat has the memories of countless heroes and has a talisman against saidar, Perrin is a lord, Loial can fight, Min can read auras and fight with knives, etc. It is getting so grand, that I fear for the books to come.

Even so, I've enjoyed the book and at the end I could barely stop reading to see where all the tension accumulated in the last hundred pages would explode, and how. The grandness and action packing of the book also led to a kind of split, where the stories started now have not ended yet and I must continue to read the series to see what is going to happen. The name of the book is also strange, as the Lord of Chaos is somehow related to the Dark One, but we don't really learn who he is; only hints are left here and there. Finally, Shai'tan seems to be more than just the cardboard evil destroyer of life and gains some complexity.

Sigh! There are 14 books in the series, I have just started the 7th and they seem to be growing in size as I go along... this is going to take a while.