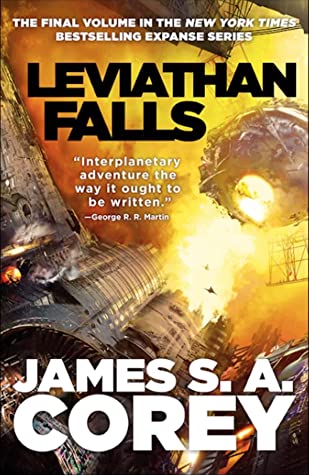 There is an issue with American science fiction, where the stakes have to be raised all the time. Everything has to become different, bigger, flashier, louder, until it becomes so ridiculous that you just have to start over. My greatest regret is that the Expanse series didn't focus more on the Sol world, so carefully crafted in the first books only to be discarded for (cheap?) alien cosmic horror. Perhaps there was never a market for that, but when the series ended, it is the complex interaction between Inners and Belters and the larger than life characters there I missed the most.

Leviathan Falls doesn't address all of the open threads, loses focus on the world and stays on the crew of the Rocinante: victims, heroes, rebels, guardians of the Universe. It then unequivocally cuts all of those threads and ends the entire series with terrible finality.

But the book is great, like most of the series, a page turner that I couldn't let go until I had finished it. Stakes were never higher, heroes never this heroic, villains never more terrifying and yet relatable. To me, at this moment, biggest villain(s) is still James S. A. Corey for killing my world.