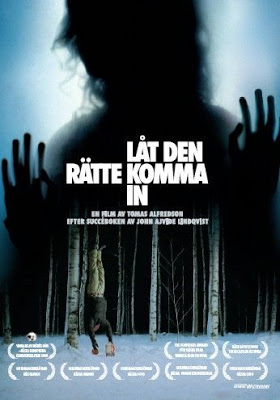 I used the original name for the book, but I didn't read it in Swedish, I read it in English for obvious reasons. John Ajvide Lindqvist wrote this 2004 book and the screenplay for the 2008 Swedish movie with the same name, but not for the American version Let Me In, made in 2010.

Let the Right One In, as the title of the book translates into English, is the story of a bullied 12 year old that forms a relationship with a child vampire. And not the sparkly or stylish vampires, but the ones that kill for a living. The title comes from verses of Morrissey's song Let the Right One Slip In. Of course the Americans could not help but remake the film using beautiful people and more romance. Actually, I didn't see that version and maybe I should before I start saying bad things about it, but I did watch the Swedish version and it was a beautiful film and it was the reason for me reading the book. If you haven't seen any of the versions I highly recommend you read the book first. The film is more mellowed down, but also preserves some hints of the story in the book and has that same eerie alienated feel to it.

The movie transforms the story in a sort of romantic late childhood thing, but the book is only slightly like that as it covers uncomfortable subjects like the poor and artificial Socialist suburbs in Sweden, child gangs, bullying, paedophilia, homosexuality, murder. The story is both spooky and disturbing, but also weirdly comforting. I really don't want to spoil it, so I will end with the link to my review of the Swedish film and a short conclusion: the book is not brilliant, but it is decently written and has a good story. It would be a shame not to read it.