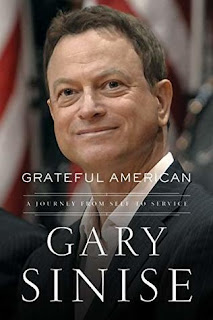 We know Gary Sinise from Forrest Gump, CSI: New York, The Stand and so many other movies and TV shows. I've always liked him, not in a "Wow, he's great!" kind of way, but he always gave me this impression of a serious and decent guy. And there are two things I found most relevant in Grateful American. One, Sinise is a serious and decent guy. Second, Americans are weird.

The book is made out of chapters that do not necessarily follow each other chronologically and instead are each focused on a specific theme. Some of them I loved, the ones related to how acting changed him from a lost and wild kid to someone belonging to a family he made efforts to build and support, for example. Some I didn't really get, like those focusing on why American troops are defending America and the world from evil and how brave they are and the people trying to kill them are cowardly terrorists.

I feel Gary Sinise likes to belong. He got saved by acting, put all of his passion into his theater company. Then he found supporting the military and giving concerts and raising funds for the "fallen heroes" and "our wounded" and first responders. At some point he even found religion, after being an atheist for his entire life, just because it gave structure to his family. Yet for all the talk, he focused mainly on what he did and what other people did with and for him than on other people or on what he felt. He barely mentioned his family up until they got sick or died.

I like reading autobiographies, especially from actors, because they present things from a very personal perspective, making me feel I am living a part of that. I partially liked this book, but it didn't give me the feeling I wanted. What a difference between this book mentioning Sally Field because she was in Forrest Gump, the film that made Sinise famous and won awards, and Sally Field's autobiography, which barely mentioned the movie and instead focused on what was emotionally important to her. On the other hand, it was impossible for me to empathize with the courageous American troops who bomb a country in the middle ages, then arrive there to liberate cities and give toy animals to orphan girls. And that part was important to Gary Sinise.

Bottom line: it felt to me like the book looks upon Gary as an outside person would. It felt impersonal and a bit self centered at the same time. Actions, events, curated feelings. I was expecting something more raw and personal.