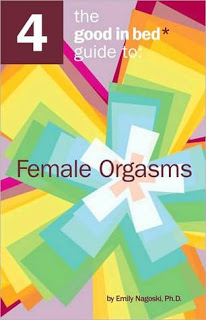 Female Orgasms is not so much as a book, as a really tiny set of chapters that are barely connected to each other. Emily Nagoski is frustrated by the way male standards are used to judge all sexuality and makes a point in this booklet that it is unhelpful, at best. However, while some of the ideas in the book are interesting, to me it seemed as a list of ideas and ramblings gathered together in order to form a volume, with most of the things either really basic or without any narrative or connection to others. 100 ebook pages and 26 chapters, that's saying something.

An important concept that Nagoski is making efforts to popularize is the one of arousal nonconcordance. In other words, while for men there is a strong correlation between physical sexual arousal and the desire or openness for sex, for women it's not quite so. Experiments of people watching porn while devices compare their sexual arousal and also take their reported input of how aroused they feel show consistently this is true. I do feel, though, that the author pushes a little too far, attempting to completely decouple the declarative and physical arousal. Considering some men use opposing ideas as justification for non consensual sex ("your body wants it, so you must want it" kind of logic) that is understandable, but less scientific than I would have liked.

This book is part of a series about sexuality, written by different authors, called Good in Bed Guide. I found it basic, but probably helpful for a lot of people. I wish it would have been better written and edited, though. Also, try reading this on the subway with a straight face.