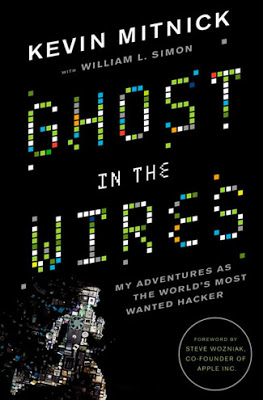 When I was a child I watched with huge eyes movies like Hackers, enjoying the shenanigans of computer rebels fighting the stupid law enforcement and the "evil" hackers. Of course, there was also Angelina Jolie. Even then I knew that my pleasure was a guilty one: no way could the police be that stupid, no way it would be that easy to penetrate all kinds of systems and produce effects so flashy. A while after that I watched Skeet Ulrich in the movie Operation Takedown, which was a more realistic hacker movie (and one I think Skeet did a great job in). It depicted how Kevin Mitnick has been apprehended by the authorities. I really loved that movie, although it had a lot of eye rolling moments.

Fast forward to now, reading Ghost in the Wires, Kevin Mitnick's book about himself, practically a hacking autobiography, and I loved this book every bit as much as I liked those movies as a kid. Not only I couldn't leave the book out of my hands once I started reading it, but was shocked to see that reality is not that far away from what was depicted in hacking movies. It was also interesting to read how the script of Operation Takedown came to be, which Kevin considers defamatory and mostly untrue.

Long story short, Mitnick is a smart kid with a great memory, an absent father and no real friends. He starts dabbling with radio and telephones and manages to get access to phone systems way before computers where personal or connected to each other. He's a kid, though, and he gets caught a few times. Nobody seems to understand he does it just for the fun of it and he can't seem to understand why nobody gets him. In the end, pushed by the desire to challenge himself, but also by authorities baiting him all the time, he becomes a life long hacker and eventually gets caught.

A shocking part of the book is how easy it is to penetrate any system, not by whatever technical wizardry, but by simply tricking people into giving you information and access. Called "social engineering" it was Mitnick's strongest point and at several times in the book, when the technology would not allow him to enter one system or another, he would just abandon the tech stuff and go with tricking people. Already having knowledge on how to manipulate phone systems made that a lot easier, as well.

Another, less shocking, but utterly disappointing part is about authorities. Just as they are now about file sharing and whatever "crisis" they are in, law enforcement agencies are basing their entire existence on pure power of coercion, ignoring the rules that they themselves are enforcing and being motivated only by keeping that power in their hands. Technical morons, they only seem to be getting into the action when their pride is affected. In this book Kevin Mitnick dances around security personnel, local cops, FBI, NSA several steps ahead of them, but they only seem to really mind when newspapers start publishing articles that makes law enforcement look bad. And once they have him, caught only with the help of other hackers, they are using all the dirty tricks in the book to bring Mitnick to his knees. Nothing has changed from then to now, just look at cases like Gary McKinnon's. Intimidation is a bully's greatest strength. That's sad.

I would have to say that the most unexpected thing was the tone of the book, which is almost exuberant. Mitnick has not become a bitter and paranoid man after countless personal betrayals and authority abuse and he is not angry at all. If anything, the guy is happy to have lived as the lead actor in the "Myth of Kevin Mitnick", which has grown way bigger than the real person. There is a scene when he gets outside of a building and there are hundreds of fans there, shouting, and he looks behind to see if there is a celebrity around.

Bottom line: this is a book you can't miss. It is easy to read to the point of instantly addictive, it is well written with enough juicy technical details to keep one interested and, most of all, makes you feel good, even in the horrible moments of his detention. It makes one wonder, did Mitnick socially engineer himself into remaining an open and cool guy in the face of adversity? Or is it he had this strength all along and that is his most powerful "magic"?

I know about Cosmo from the very same article :) The truth is that Cosmo is only 16, he didn&#39;t get to reach the maturity needed to fully grasp the opportunities he has and mistakes he has done. Mitnick&#39;s book comes from a more mature perspective, where he knows that he is partly guilty, knows he has been treated incorrectly by the state, but he doesn&#39;t just point fingers, instead trying to paint the picture as he sees it, sharing the experience. Then again, as in the Cosmo article, Mitnick is a very, very good liar. Who can know what the truth is? What he says may be true, but not completely factual. Or viceversa.

Sounds like a great book, have you read about Cosmo? a 15 year old hacker thats serving with other hackers http://www.wired.com/gadgetlab/2012/09/cosmo-the-god-who-fell-to-earth/all