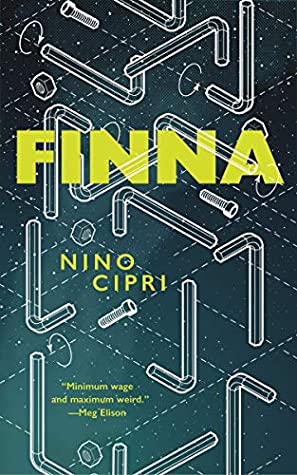 Finna is a novella of only 144 pages, of course the beginning of a series, one that I have absolutely no intention to read. To be blunt, the only reason why I didn't rate this booklet the lowest is that Nino Cipri is actually queer/trans/nonbinary and so I can't complain about the characters being that way with absolutely no relevance to the story. I probably fell (again) for one of those agenda driven fake reviews that recommended it.

Speaking of the story, it's a rather refreshing concept but that can be explored in a single page. It's a variation on the "doors to other universes" trope. However, most of the short span of the book doesn't focus on the idea or on what happens or even on character development. Instead, it goes on and on about how offensive it is for people to not use the correct pronouns, how tough it is to be queer or mentally afflicted, which is the all the depth the two main characters ever reach. The writing style is telegraphic, almost report like, lacking anything to make me feel anything (good).

It is a really annoying book because the leads are totally unlikeable. They work at an Ikea clone for minimum wage, they complain all the time, they couldn't care less about people around them except for the awkward romantic relationship they have and even then not much, they go through parallel universes without paying attention, they act and emote without considering the consequences of their actions then blame it on how their brain is wired and so on. It's a story seen through the eyes of teens who would rather spend time with their phone than wonder about the world. I wouldn't be surprised to hear this was one of those books written in tweets or whatever. Still better than 50 Shades of Grey, but that's not saying much.

And yes, I sound like a grumpy old man because this is what this book makes me feel like: totally disconnected from the entire generation of the characters in the story. They don't even sound like real people to me. It's a story about exploring strange new worlds which pauses every time something could be interesting to focus on how the characters felt in the world they left behind and how their relationship should have, could have, will have...