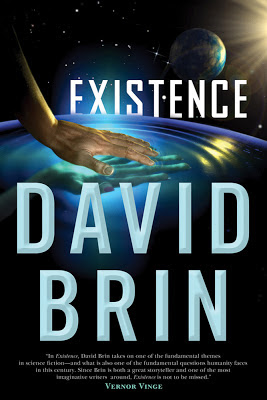 I was waiting for the moment when I would be reading a new sci-fi book. Based on a suggestion from some source I have long forgotten, I chose David Brin's Existence, a futuristic hard science fiction book.

And at first it felt good. It described a cyberpunk near future, after some sobering disasters that rallied the world against nuclear war and global warming. It was dialog based, like the books of Asimov. It delved into the political, economical, technical and personal aspects of the world. It even started with the discovery of an alien artefact and started an exploration into the Fermi paradox, the philosophical conundrum that asks: "if there are many civilisation in the galaxy and they all reach the sophistication to go to space, where are they?".

But soon it started to feel all wrong. The different stories were fragmented, in some parts badly written, in some parts conflicting, some never connecting to one another, like Brin got some texts he had worked on and mashed them all into the book. Then the "chapters" all starting with a little media announcement or quote that explained bits of the world, but in a reporter editorial style that said nothing and brought nothing new to the table. And then it started with the goading: an idea was forming, the characters were reaching a realization or another, and before the reader got to see what it was, another chapter was starting.

My conclusion after finishing the book is that, while filled with interesting ideas and also having a main plot that is, indeed, ingenious, this was not a good book! I've spent the time to read the acknowledgements at the end only to find I was right: Brin did publish a lot of the stuff in the book in short stories here and there. And after finishing all that material, he speeded things up to show the "future", because he really had been disconnected from all the stories he started, reaching that annoying fast-forward effect one often finds in the works of writing amateurs. And the thing is, David Brin is not an amateur - at least he shouldn't be after all the books he has written and prizes he has won. One possible reason is that it is the first book after a hiatus of 10 years. I hate to say it, but it looks like he needed some money and this is the way he chose to do it: frame a couple short stories, a couple essays and an old Usenet into a longer novella that feels like the patched mess it actually is.

The bottom line is that I can't recommend this book. The main idea is interesting, but it can be summarized in a few words, which I won't do for fear of spoiling it for you in case you do decide to read Existence.