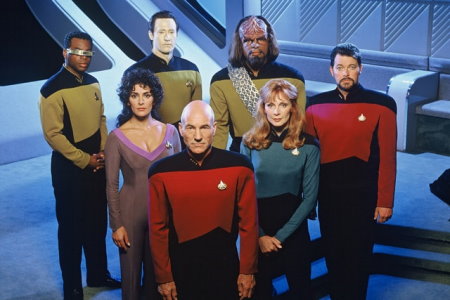 I am watching Star Trek: The Next Generation, a show that I have loved since I was a child and was watching obsessively again and again at that time. Yet as I grew older (and hopefully wiser) and with full knowledge of TV and movie culture since then, I see many new things in this show that I was unable at the time of my youth.

Next Generation is, on the surface, a story about a wonderful future in which humanity has somehow distilled its best qualities and created a post-scarcity utopia that anyone can enjoy and in which everybody can thrive. People are intelligent, educated, passionate, considerate, moral, loyal and dutiful. They don't even have money anymore!  In a show made in 1987, computers were there just to do the bidding of humans, with no creativity or decision power. Security was just a matter of choosing a good password any anyone could access almost everything given a few minutes.

However this was not unintentional. The vision of the show was focused on "humanity at its best" and so it could never be outmatched by algorithms, machines or cold calculation. And the most beautiful thing of all is Starfleet, an organization dedicated to knowledge and exploration, diplomacy and discovery, where everyone who is insanely qualified can find their place amongst the stars, happy to serve their duty in a heavily structured navy that is at the same time diverse, inclusive, quaint and strict.

It surely inspired me when I was a child, but now I start seeing things that I couldn't then. The judgement of anyone who is different while expressing views of total tolerance, for example. And I am not talking about species that were particularly designed to be repugnant or immoral, like the Ferengi, but about people. Barclay, for example, a brilliant engineer that can't find the confidence to assert himself is ridiculed for his addiction to the holodeck, called Broccoli behind his back, almost transferred because he is not expressing himself as expected and punctual enough, yet embraced when he saves the day. At that time it felt like an honest mistake that the crew wished to resolve and in the end did. But what if he didn't save the day? In another episode, Riker refuses yet another promotion to captain and an admiral asserts his career will suffer, as other young and brilliant people aim higher than him, which makes him seem a risk avoider. And in yet another episode Picard goes back in time to behave more rationally in his youth, only to find himself in the present relegated to a role of lieutenant that is not taken seriously when asking for advancement because he had always chosen the safe path.

All this went over my head when I was young, but now it sounds a lot just like the most toxic of corporate cultures. You either fit in and play happy or you are pushed out to a life that no one even mentions. You can tend plants in your garden for the rest of your life, because if you didn't fall in line with the office rulebook, you won't be working there. That doesn't sound like a utopia for me, but a dystopia, a world ruled by churches that expect, with kindness, that you obey the rules exactly, both in your work life and your personal one, move in a certain way, behave in a certain way, talk in a certain way and navigate topics of conversation carefully. In fact, many a time in Star Trek, the line between work and personal life was explicitly rejected. In one episode Deanna Troi shouts to her mother that the crew of the Enterprise is her family and there lies her life. In many others Picard refuses to go on vacation and even there he is reading heavy stuff that will help him at his work.

The principles spouted by the actors in the show are also routinely broken by actions motivated with sophistry and dramatism. But not just anyone can break those principles. One of the main cast can do it, and always under the benevolent yet strict oversight of the captain. And in case you want to "play the game" and "fake it till you make it" there is always counselor Troi to invade your privacy and broadcast you real emotions to the captain.

And I admit that I am a corporate guy, enjoying the relative safety and monetary comfort by sacrificing some of my principles and remaining relevant to my level of employment. The truth is that the same environment can be a blessing for some and a nightmare for others. Yet the problem is not the rules themselves, but how static and rigid they are. If one can either choose one way to behave or the other, with no overlap and a large gap between the two, there is little chance for people from a group to move to the other. Without that mobility things stagnate and die and that is exactly my own experience in real life corporations.

I am not trying to criticize The Next Generation here. It was an amazing show that churned 25 episodes of good storytelling and decent acting per year for seven years in a row and which generated two spinoffs: DS9 and Voyager. Compare this with today's Star Trek: seasons of 13 episodes with three times the budget per episode (adjusted for inflation) and a linear storyline that is neither original nor well thought. What I am trying to say is that under the veneer of a beautiful bright future, one that Gene Roddenberry imagined with the best of intentions, the details belie the influence of the real world and of how people really function. It's a wonderful example of how the same concepts and the same words look great at one time and less so after you experience them.

Bottom line: I think Gene's vision was great and the future imagined by him puts the present to shame, yet I am sure I would have had a very hard time adapting to life on the Enterprise. Perhaps I would have been the guy at the teleporter station, who obviously has no reason to do anything there unless when orbiting or approaching another ship, doing his job in a place with no windows or chairs and that somehow everyone knows by name. Or the cadet who always finds ways of optimizing things, but can't navigate the complicated rules of political correctness or the chain of command when wanting to express them. Or Barclay. Probably Barclay.