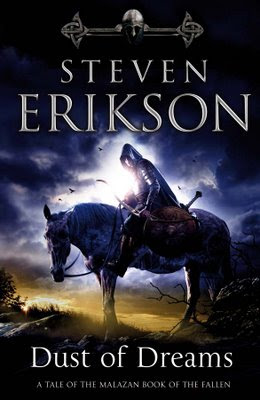 I don't know what to say about Dust of Dreams. It is the first book in the Malazan Book of the Fallen series that is only partially finished, only the first part of a larger story, spread over the ninth and tenth books of the saga. Since the last book from the series, The Crippled God, is not yet released, I have to wait for a year until I get to know what happened.

This being said, I don't really know what happened in this book, either! The Adjunct moves all her forces towards Kolanse, the last of the K'Chain Che'Malle are rising up, there is a group of undead Jaghut that work together, two pairs of Eleint blooded ascendants that have yet to betray each other, a bunch of semi-undead (they have their memories) T'Lan Imass, three pesky gods, a schizophrenic Icarium... the list goes on and on... One thing is for certain: I doubt the tenth book will be able to satisfyingly end the story. The huge number of storylines pretty much guarantees it.

So, I liked the book, but I feel I need to reread it to understand it, maybe just before the tenth one is released. Meanwhile, I am oscillating between the Vorkosigan Saga and the Discworld Saga... Whatever should I start reading? Considering they both have about 20 books each...

Update: It seems the release of The Crippled God has been delayed until 2011, even if there were hopes it would appear in libraries this autumn. Damn!