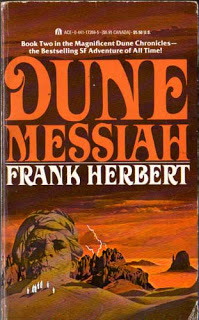 Dune Messiah is the second book of Frank Herbert's Dune saga. It is two and a half times smaller than the first book and it feels almost completely different. Paul has been emperor for some time, not much, but enough for his jihad to bring the death of tens of billions. The government of the universe is now his, a combination of religion and bureaucratic despotism that he foresaw, but could not have prevented. The house of Ix and the Bene Tleilaxu make their appearance. There are conspiracies against Muad'dib and his family from every corner and, if the first book was of his victory over his enemies, however painful, the second book is all about his defeat at the hands of the future. He walks the edge, loses almost everything, all in the name of a better future for human kind. All the characters are weaker, more human, some less human but still weak.

All in all, it is a nice book, well written and interesting, but it felt like a kind of bridge between Dune and the next two books, which have their focus on Paul Atreides' children. We are certainly looking forward to brilliant stories and great writing, but Dune Messiah seemed a little too melodramatic, less focused, with less work done on it. Compared to its predecessor, it seems a disappointment; compared to most other books, it is still great.

It is amazing to me how each decade these books are telling me something different. I still see the flaws, but they are subtly different, I still see the greatness of it, but also altered by time. Every time I read Dune it changes me, like the spice melange, makes me more introspective and extrospective. I look at things with more depth, I examine myself with more care. I love that feeling and I enjoy myself more.

One thing remains the same, though: I immediately identify with the Bene Tleilaxu and the House of Ix while reading the book. They are the tinkerers of their time, but without the whole ideology and set in ways behind the Bene Gesserit or the Fremen. Are they evil? Who cares! Therein lies freedom.

Anyway, back to the book. Just like in the first one, there are some important events that happen out of sight and we only hear from them or are explained by the characters. In Dune, the killing of Chani's first child was almost an afterthought. In Dune Messiah we just have to accept that Jessica, the loyal mother of Paul, just decided it's OK to leave Arrakis and move to Caladan, accompanied by Gurney Halleck, no less, the man who hated the Harkonnens with his whole being. Some important characters are summarily executed off screen, too, once they've done their job. I guess that's how the world works at any time, but as a reader, I would have liked more meat on those bones.

My instinct above, where I said it was a bridge between Dune and Children of Dune, was right. Even Brian Herbert wrote about this in his introduction. Many people were let down when they read Messiah, and the general view was that once Paul has become a classic hero, readers were not entertained by his downfall. But I don't think it's that. I think it was the vagueness of the book, the pompous implications of words that did not explain anything. That's both good and bad. Let me explain.

At first read, you feel like you are part of some mystical universe where each moment, each gesture, each word has world shattering implications. Coming from the boring world we feel we live in, it's a revelation. You feel like with just a little more attention to detail, a little more thinking about it, you will also glimpse the path things take. At second read, you are used to the feeling and you kind of know you will not get to the hidden truths of the book, but you still hold hope that a better person could see them, so it's still somehow inspiring. At later reads, you just understand that Herbert intimated secrets that he himself never deemed necessary to invent. You see the inconsistencies, how characters that had complete control of their minds and bodies act like children, or how the universe is ruled absolutely by Paul, with no constitution or legal organisms that are not subservient to him, but then he must obey the Fremen law whenever the plot sees it fit.

For me, this remains a thing of hope. The Dune series is great, but it could have been improved upon. Some writer somewhere will manage to write something similar that would upstage it by the sheer personal effort to be attentive to details and to imagine a world greater than our own.