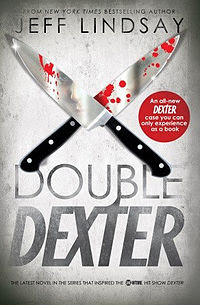 The sixth book in the Dexter series is not really better than the others. I would have thought that five rehearsals would have resulted in a slightly better book, but instead it seems as if Jeff Lindsay is slowly losing the inspiration he started with book after book. In Double Dexter, the police is impossibly incompetent and this time even Dexter falls into the same category. It takes him chapters to do and act like he was supposed to and a lot later than even an average reader would see it coming. The opponent is inconsistent and not really a challenge, if it weren't for Dexter's apparent drastic drop in IQ.

If you have not read any of the books so far and maybe just watched the CBS series, be warned that they are completely different beasts. The show writing is clearly better and the plots are divergent to the point of being different stories altogether, but with the same character. Not that this eighth and final season is great writing anymore, but that's a different subject altogether.

Bottom line: Having read Double Dexter, I cannot say that I hated it, I really like the character, but I think Lindsay is bored with Dexter. Maybe he should just invent someone else and start writing better books.