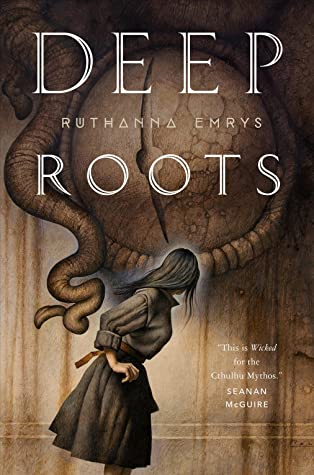 Winter Tide, the first book of the series, was a refreshing blend of Lovecraftian Mythos and a perspective focused on balance and peace, rather than power problem solving. So, a year and a half ago, while I said I enjoyed reading it, I was also saying that it was a bit slow in the beginning.

Deep Roots has a few things going against it. The novelty wore off, for once. Then the characters are not reintroduced to the reader, there are no flashbacks or summaries, so I had no idea who everyone was anymore. Finally, it had almost the same structure as the first book, but without introducing new lore elements and instead just popping up new characters, as if keeping track of existing ones wasn't enough work. It starts slow and the pace only picks up towards the end. This made it hard for me to finish the book and maintain interest in the story.

This time, Aphra and her motley crew need to stop the Outer Ones, ancient creatures with immense power, from saving humanity from extinction. Yes, it is a worthy goal, but they want to do it by enslaving and controlling Earth, treating us like the impetuous children that we are. With such a cosmic threat I would have expected cosmic scenes, powerful emotions, explosive outcomes, but it was all very civilized and ultimately boring.

Bottom line: Ruthanna Emrys' fresh perspective persists in this second installment of the Innsmouth Legacy series, but it isn't fresh anymore. I am sure the experience is much better if you read Winter Tide just before it. As it stands, Deep Roots reads like a slightly boring detective story with some mystical elements sprayed in. I don't regret reading it, but I don't feel the need for more.