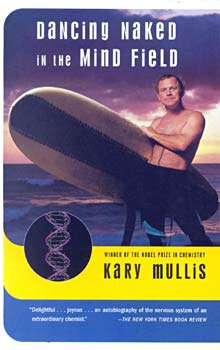 Kary Mullis is a chemist who, in 1983, invented Polimerase Chain Reaction, something that would revolutionize DNA analysis in terms of increased speed. He won the 1993 Nobel prize for that. He also is a controversial scientist who claims possible alien encounters and telepathy, denies global warming as an effect of human intervention, is skeptic about HIV causing AIDS and generally believes that most scientists are inventing reasons to get funded rather than doing anything scientific. He also admits smoking pot, taking LSD and generally experimenting with any mind altering chemical that he can make. He likes women and some of them like him. That is what this book is all about, a sort of "I am Kary Mullis, hear me roar!".

I started reading the book because I was falsely led to believe that he describes how training his mind with LSD lead him to the idea of PCR. The book is not about that at all, and if the article above is true about Mullis had an advantage over his colleagues: he had trained his brain to think differently by using hallucinogenic drugs, there is no mention of that in this book.

It is simply an autobiography, but written with gusto and sincerity. Some of the things he says are both logical and hard to accept (because so many others are of opposite views), some of them are simply personal beliefs. As many a talented person, he is intelligent, he had early opportunity to practice his passion (chemistry), a close friend to share it with and support from a local chemistry business owner who kind of adopted him for the summers and gave him the tools he needed to grow. The way he writes his book reminds me of the style of another scientist friend of mine: devoid of bullshit and intolerant of stupidity.

Bottom line, it is a nice book, simply written, short, I've read it in a few hours. It is a window in the life of an interesting person, and as such, I liked it. I can't say I've learned much from it, though, and that is somewhat of a disappointment coming from a book written by a man of science.