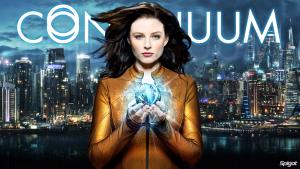 Continuum is a strange TV series. It starts as some sort of police procedural, only set in the past from the standpoint of a future in 2077, where the corporations won and the future is stateless, corporate run business, where the police is just another private security force, etc. The crisis point is one from which a cell of anticorporate terrorists are sent back in time, together with a Protector (a cop from the future) to the near future (from our perspective). Each season from there on is more or less a different story, where the viewers much suspend their disbelief (again) to understand the new timeline story. As usual, a time travelling idea destroys, rather than rejuvenates, a story. Instead of a steady, involving plot, we get an all you can eat buffet of redefining the story. Each season we get basically a new series, but with the same characters. And it kind of works, but it loses all sense or meaning. (Meaning you would be dumb as fuck - and as me - to watch this)

I was fortunate enough to watch the last episode of the series (season 4, episode 6), when I was inebriated. I have to say that this is the only way Continuum will make sense to you: utterly drunk and on fast forward. This way, the storyline invented by cocaine driven Hollywood execs makes a little bit of sense and gives one the feel that the idea Continuum had has a sort of ... pardon my pun... continuity. Other than that, you should definitely avoid this series.

Rachel Nichols is super sexy and cute. That's the only thing going for the TV show. I am not kidding; I actually watched the series exclusively because she was hot. The story, the characters, the way everybody would get in bed (so to speak) with everybody - without having sex, mind you - was just puerile. And the last episode (read this: the last episode they had the budget to finish) was so underwhelming that it made me cringe with pain and disgust, only I was so piss drunk I didn't care. And I would definitely bone Rachel Nichols if I had the chance, so you, the more moraly advanced human beings, should ignore this series altogether.

Bottom line: everything that happens in Continuum feels natural when you are piss drunk. You should avoid it, if possible, if not inebriated.