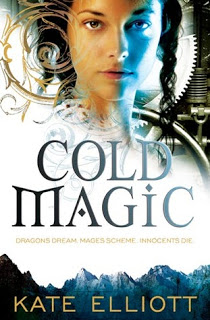 Just look at that book cover. Someone was already imagining the multiple Hollywood movies, or at least a TV series. Yes, it's another young adult story, but this one is different because it is from the point of view of a girl. Besides, I've read several YA books and I liked some of them.

In Cold Magic, Kate Elliott describes a feudal world in which the rulers are either princes or "cold" mages, although there are many other aspects of magic in the world that are briefly explored. There is a lot of history, too, parallel to the European one - if magic was real in the Napoleonic times. For the first quarter of the book I lapped it up. I was curious to see how this young girl manages to untangle the mystery of the things that are happening to her and if she will thwart the powerful people who want to use her and her girl cousin. However, after a few chapters in which kind of the same thing happens over and over again, with no real reason, I was getting restless. Add to this the long descriptions of personal fashion, grooming and judgement on how people look and what it tells about them and I was starting to get a little annoyed. When it all turned to romance, I was simply disappointed. It wasn't that the point of view of the young woman ruined the story, but that it irritated me enough to make me attentive to the plot holes.

Bottom line: I am half curios on how the world building will evolve and how the author is going to describe this alternate magical Europe, but on the other hand I feel like the entire book I waited for something to happen and to make sense, when in fact all characters did things in order to move the story in a certain direction. Instead of being character driven, the plot meanders and the characters drift on it like leaves on a river. I can't empathize with people that lack almost any kind of control over what happens to them, especially since the trope of the young person thrown into a maelstrom of unexplained situations with people that speak in riddles and keep things for themselves is so overused in YA novels and I am tired of it. I will not read the next books in the Spiritwalker series. It was fun for the first half of the story, but then it went downhill.