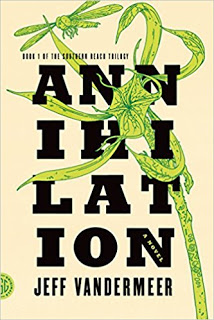 Annihilation, by Jeff Vandermeer, is a very short book that seems to be inspired by the Strugatsky brothers' Roadside Picnic. The same timeless quality, thoughtful introspective characters and a weird area that seems to defy the laws of physics and biology. But nothing is truly revealed, or learned, other than the somewhat senseless thoughts that the main character has. The other three women quickly succumb to the influence of "Area X", so we are left with a weird chick moving around in an unexplainable place with unfathomable rules. If Dallas' Pamela would have woken up from a dream at the end of the book, it would have meant just about the same as the actual ending.

I only read the book because of the upcoming movie. I am fairly certain that it will be better than the book, which manages to bore in half the pages of a decent story. It isn't that I disliked it, it's that I did not actually like anything in it. Everybody is acting crazy and without context and in the few pages that bring some context, it's the boring relationship between the lead and her husband and I couldn't care about any of them.

I am sorry, but when you write a book about a scientific expedition, it's customary you write about characters that behave like scientists, not like directionless drunkards with self-traumatic histories. I don't understand how this book won any science fiction award. It is well written, but it's barely average. I am not going to read any of the other books in the trilogy.