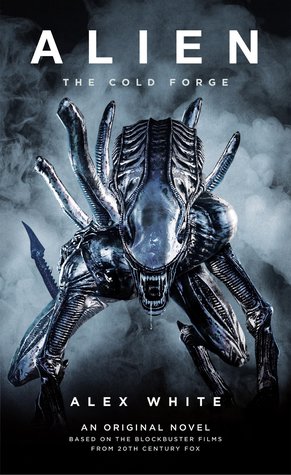 I am a fan of the original quadrilogy, but The Cold Forge is the first book from the Alien franchise I am reading, mostly because of the Alien Theory YouTube channel which recommended this (and Into Caribdis, also by Alex White) as two of the great books in that universe. And I did like it, it is well written and using a lot of the Alien trademark items: the bleak predatory corporate world, the psychopath in love with the aliens, the isolated setting, the company stooge, the female protagonist who has to do everything and then some just in order to survive, the double crossing, the androids, the power loader robot and so on. But at the same time, it felt too familiar, like the writer was too afraid to set foot outside the established borders of the franchise, lest he stumbles and gets impregnated and eaten.

Also, while reading the book I've got to realize that Alex White nailed it in regards to the main character. Yes, she is a woman, but physically weak. Her strengths lie in determination, smarts and high morals. It was never about the gender of the protagonist as it was about raising the stakes by following a weak character who has to overcome even more than an average person. I think Ripley is also the same, even if towards the end she was physically intimidating and powerful as well: not a strong female lead for the sake of it, but because it makes sense and brings value to the story.

Anyway, back to the book, I felt that we got way too much of the villain and too little of the aliens, maybe even of the protagonist herself. As such, The Cold Forge is more a very detailed exploration of the mindset of a psychopath than a new perspective on the xenomorphs. We get a space station in which dozens of aliens roam around and the focus is almost always on what the antagonist thought and felt while conveniently only secondary characters had to deal with the aliens.

Be warned that this book will make you hate humanity a little bit and get you more and more frustrated, to a point close to Stockholm Syndrome, with how paralyzed by social norms the characters are and how freely the predatory psycho navigates through those and kills anyone he wants. The parallel is clear: the worst humanity can bring is very similar to the alien drones: hidden, unexpected and brutal, uncaring of anything but their goal.

Bottom line: I liked the book and I think it was a good introduction to the literary Alien universe, but I expect many new ideas and more focus on the aliens in following works. I don't want to read again and again about people being people while some random killer bug brings a slight element of chaos to the story.