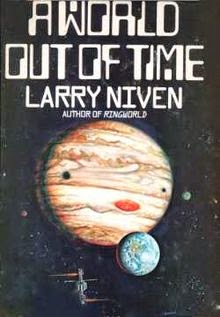 A World Out of Time is a book out of time as well. Larry Niven wrote the book in 1976 and it describes events that happen over a span of three million years, but it feels like The Time Machine. The hero is a guy from the 70s who's memory gets uploaded in the body of a convict hundreds years later, sent on a mission that was supposed to last tens of thousand of years (Earth time), but ending up in a joyride around the galaxy that brings him back on Earth millions of years later. The strange world of immortal creatures living like feudal savages in a world filled with broken and discarded technological wonder, but somehow still looking human, is difficult to take in. The cowboyish behaviour of the lead character and his inconsistent switch between genius and ineptitude don't help either.

It doesn't mean the book is not entertaining. I had fun with it. However it feels really long and old and I don't intend to read the other two Niven books in the same batch: The Integral Trees and The Smoke Ring, even if they sound slightly more interesting.