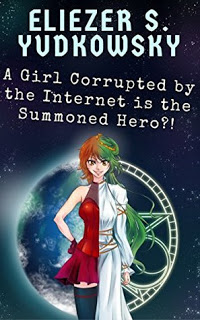 I've had a blast reading Harry Potter and the Methods of Rationality, a humorous take on Harry Potter if he were educated in science and not just another emotional teen lucky enough to be "the one", so as I was reading A Girl Corrupted by the Internet is the Summoned Hero? I was really hoping it wasn't just a one off. And it wasn't! Although much shorter and not so rich with references, this novella from Eliezer Yudkowsky is just as funny as I hoped.

A self proclaimed translation of a Japanese manga that was never written, the story follows a girl that gets summoned into another realm as the virgin hero to save the world from evil. However, the reason she is still a virgin is habituation to Internet pornographic depravity and losing interest in any normal relationship. The world she arrives in is a world of prudes and the power of the magic there relies on one) being a virgin and two) asking prudish demons to do something awfully depraved so that they refuse.

I won't spoil it for you, but it's funny and short and I recommend it highly.