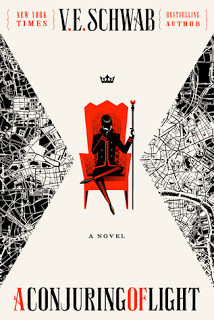 A Conjuring of Light ends the Shades of Magic trilogy, although apparently a new trilogy set in the same universe is on its way. All the major threads are closed, although some of them felt a little forced and some of the drama was clearly artificial. But at least it all ends, which is one of the major reasons I read this book, only to see how Victoria Schwab's characters will end up.

I felt that this was the more ambitious volume of the three in the series, with all three Antari having to interact, with foreign dignitaries stuck in the royal palace while it was under siege from a demented magical creature who believed itself a god, with ties with families and past revealed, with new places and new magic. However, the book was quite inconsistent. For example, there is a plan to use a spell to seal the god in a body. When it is inside one, they forget about it and fight him with knives and fire and what not. There is a spell that could restore Kell's memory. He wonders if he should use it, then we forget about it. As for Grey London (ours) and Black London (the one where the creature originated), they are completely ignored.

The personalities of the characters also change a lot, with everyone acting brave and selfless (sometimes to stupidity) as if forgetting we are talking about a ruthless street thief, a killer turned sociopath by years of torture and so on. To me it seemed as if the author wanted a tough story, but she couldn't help turning it into a classic hero quest with a happy ending.

Bottom line: I had fun reading the series, but I won't continue with the next trilogy. It's not bad, but it's not above average either.